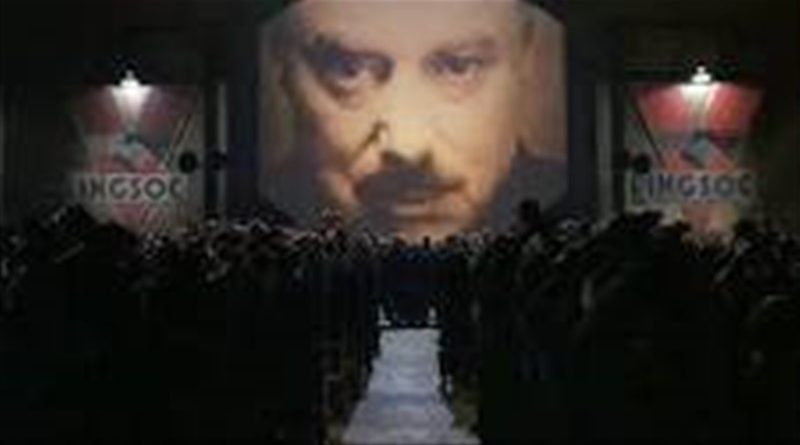 Orwell wrote that through the alteration of the past, and by portraying the remaining memory of history as evil—or supportive only of the socialist regime—classic texts such as the American Declaration of Independence would be incomprehensible in their original context. People would be incapable of understanding them as they were originally intended.

To demonstrate the full scale of irony, let’s look at what Orwell predicted in “1984”:

“In practice this meant that no book written before approximately 1960 could be translated as a whole. Pre-revolutionary literature could only be subjected to ideological translation—that is, alteration in sense as well as language. Take for example the well-known passage from the Declaration of Independence:”

Orwell quotes the passage stating, “We hold these truths to be self-evident, that all men are created equal, that they are endowed by their creator with certain inalienable rights, that among these are life, liberty, and the pursuit of happiness.

“That to secure these rights, governments are instituted among men, deriving their powers from the consent of the governed.”

With that statement, the founding fathers of the United States described truths they believed were self-evident: that the rights of men—and equal opportunities in the world—are given to men by their divine creator. And that among these natural rights are the right to live, the right to liberty, and the right to pursue happiness.

The  Founding Fathers state that men institute government to secure these natural rights, and state government derives its power from the consent of those it governs. This concept, in and of itself, goes against the totalitarian trinity of socialism, fascism, and communism that took hold of the world in the 20th century.

Under these modern totalitarian systems, the people are given their rights by the government—not the other way around. Under them, there are no natural rights, there is no creator beyond the halls of government, happiness is in money and immoral indulgence, rather than in virtue, and the average man is seen as too foolish to be given the freedoms of liberty.

Orwell saw this coming. His fictional totalitarian regime was specifically a socialist regime, with “INGSOC” being his acronym for “English Socialism.”

Orwell continues his quoting of the Declaration of Independence, noting the next line: “That whenever any form of government becomes destructive to those ends, it is the right of the people to alter or abolish it, and to institute new government…”

In other words, if a regime opposes the natural rights it describes, and goes against the idea that government arises from the “consent of the governed,” specifically to uphold these natural rights, then the people of that country have the right to alter or abolish that government, and build a new one.

With that idea, none of the totalitarian regimes of the 20th century could stand for long.

And understanding this, Orwell imagined how a socialist regime would deal with such subversive values. Orwell’s answer was the idea of a government-altered language and a warped system of values that could alter the way people interpret information. And this isn’t purely fiction either—as altering the way people interpret information is the goal of psychological warfare.

Orwell called this form of altered language, and doctored method of perception, “Newspeak”.

To illustrate how this system works, Orwell explained how it would be applied by socialism to alter how people interpret the Declaration of Independence. He said that with a document like this, the very concepts would have to be regarded as criminal, and “A full translation could only be an ideological translation, whereby Jefferson’s words would be changed into a panegyric on absolute government.”

He explained that the phrase, “all men are created equal,” could be a sentence used by the regime, but it would change it to “all mans [sic] are equal,” and its meaning would be interpreted differently to express a “palpable truth” such as the idea that “all men are of equal size, weight, or strength.”

In the same way, in our modern systems, the meaning of “all men are created equal,” has been changed. Some interpret it through the lens of identity politics, that alleged differences in equality between races should be resolved by government tyranny to manufacture equal outcomes. Rather than have an equal shot at life, the modern totalitarians believe equality should be enforced so that any effort leads to the same equal outcome.

This of course deviates from the idea that people are “created” equal by the divine, and that government should not inhibit the liberty, freedom, or “pursuit of happiness” of an individual or group—especially not through mass social engineering that would categorize and regulate people by race.

Others today try to discredit the Declaration of Independence altogether by attacking the legitimacy of the Founding Fathers, and the system of government they created for the United States.

This is based in the idea of criticizing the past, often through a lens of perception that has been altered by socialist politics. The main tool used for this in modern socialist academics is “critical theory,” which teaches students to interpret all of history through the Marxist lens of the alleged struggle between the “oppressor” and the “oppressed.”

Under this Marxist lens, the Founding Fathers become the “oppressed” fighting against the “oppressors” in Britain, making them communist revolutionary figures in the eyes of people indoctrinated by this ideology. They also become the “oppressors” who held slaves, thereby discrediting any of their actions or claims in the eyes of people who use this system of logic. Through this system, the perceptions of the Founding Fathers can be used in different ways, as political interest demands.

Orwell also explained how this would work. He called this concept “BlackWhite.” He wrote, “Like so many Newspeak words, this word has two mutually contradictory meanings.” Applied to an enemy “it means the habit of impudently claiming that black is white, in contradiction of the plain facts,” and when applied to a Party member, “it means a loyal willingness to say that black is white when Party discipline demands this.”

This concept is at the heart of today’s double standards in socialist politics—where something is good or excusable if done by their own camp, yet evil and worthy of constant attack if done by their opponents. Yet, as Orwell explained, it’s not a conscious system of double standards, but instead an internalized belief: “it means also the ability to BELIEVE that black is white, and more, to KNOW that black is white, and to forget that one has ever believed the contrary.”

“This demands a continuous alteration of the past, made possible by the system of thought which really embraces all the rest, and which is known in Newspeak as DOUBLETHINK,” Orwell wrote.

And Orwell explains that altering how the past is perceived is an important part of socialist tyranny. Without proper knowledge of the past, people tolerate their current conditions, “partly because he has no standards of comparison.”

As a means of control under socialism, he explained, the citizen must “believe that he is better off than his ancestors and that the average level of material comfort is constantly rising. But by far the more important reason for the readjustment of the past is the need to safeguard the infallibility of the Party.”

“The mutability of the past is the central tenet of Ingsoc,” he wrote. “Past events, it is argued, have no objective existence, but survive only in written records and in human memories. The past is whatever the records and the memories agree upon.