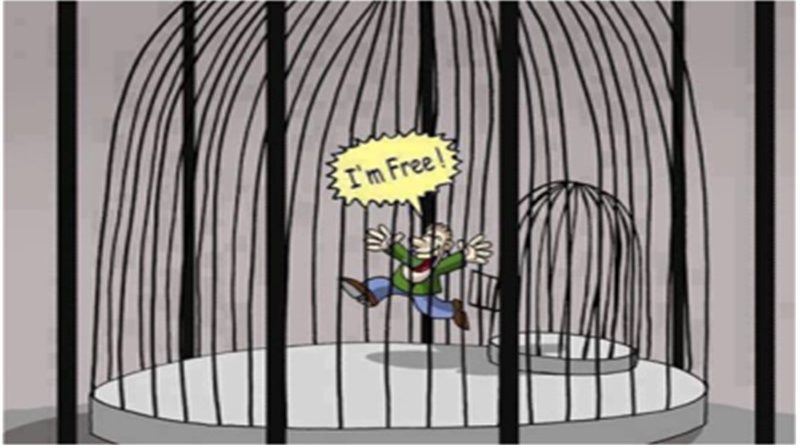 Election 2020: Choking on the Political Red and Blue Pills

Presidential election 2020 is the same as every other, except in the ways it isn’t. Allow me to expand on this.

What is the same? The purpose of all elections is to allow a band of people called the state to legitimize their claim of control over everyone and everything within a given jurisdiction. In his book The Rise and Fall of Society, the Old Right libertarian Frank Chodorov defines the state as “a number of people who, having somehow got hold of it,” use “the machinery of coercion to the end that they might pursue their version of happiness without respect to the discipline of the market place” (italics added).

The two somehows of getting and holding political power are to use institutionalized violence or to convince people to respect state authority. Statists usually pursue some combination of both. Violence is rarely preferred, however, because it can backlash into a resistance that threatens state power. It is far better for the state if people oppress themselves through willing obedience. It is even better if they express enthusiasm for their own oppression. Thus politicians and the media applaud the rah-rah attitude of cheering crowds who characterize elections. Thus voting is deified as the voice of “the people,” a fundamental right, and the best way to change society.

The situation is the opposite of what the state claims. The anarchist author Albert Jay Nock divided power into two categories: social and state. Social power is the freedom individuals exercise over their lives; when people gather for mutual benefit and when a society forms, this is also social power. State power is the control government exercises over individuals and society; it preys upon them—through taxation, for example—to enrich itself. An inverse and antagonistic relationship exists between the two types of power, with the state expanding only at the expense of society and vice versa. Freedom does not and cannot come from elections that strengthen the state’s perceived legitimacy; freedom depends on weakening this authority, preferably down to zero.

The popular celebration of the “right” to vote puzzled Nock and Chodorov. In his book Out of Step, Chodorov writes,

Why should a self-respecting citizen endorse an institution grounded in thievery? For that is what one does when one votes….Perhaps the silliest argument, and yet the one invariably advanced…is that “we must choose the lesser of two evils”. Under what compulsion are we to make such a choice? Why not pass up both of them?

The answer: people do so because they believe elections and the state are necessary evils. Despite the presence of far more effective strategies—education and agorism are only two—people see no other effective alternatives for social change or stability.

So far in the analysis, election 2020 is the same as every other election; only circumstances like voter turnout are unusual.

What is different? The state’s mask of legitimacy is slipping. Election 2020 is rife with Republican cries of “Fraud!” As early as April, Trump was ringing alarm bells about the mail-in ballots demanded by Democrats, calling them “horrible” and “corrupt,” with “tremendous potential for voter fraud.” Democrats counterattacked by accusing Republicans of destroying democracy by delegitimizing the election.

The Democrats are correct about Republicans damaging democracy but wrong about their glorification of mob rule and blind to their own role in the political carnage. Like the state, democracy is accepted only in the minds of people who believe in the system. A flood of news stories about electoral abuse have shaken this faith, whether or not the stories are true; discarded ballots, dishonest counts, lack of oversight, slack verification, ballot harvesting, and voter suppression have caused lawsuits and protests to erupt across America.

But is election 2020 any more rigged than some past ones? A 2016 article in the Daily Signal, “Rigged Election? Past Presidential Contests Sowed Doubt and Nearly Led to Violence,” lists five presidential races that are viewed as having been won through fraud. And the problem is not confined to the Oval Office. A recent article, “Don’t Forget LBJ’s Election Theft,” by Jacob Hornberger of the Future of Freedom Foundation, recounted the incredible corruption of Lyndon B. Johnson’s senatorial race. Nevertheless, the iniquities of this election seem to be unusually widespread and transparent.

Election 2020 did not provide a clear winner. The contest de facto continues through lawsuits and court decisions. Here this election could be different from most others, although, again, not unprecedented. If a tie or disputed ballots prevent both candidates from reaching 270 electoral votes, then the House will decide who will be president.

Chad Pergram, the congressional correspondent for Fox News, explains, “Congress must approve certificates of election from all 50 states.” The “crucial date is December 14, dictated by an obscure, 1887 law…The Electoral Count Act dictates that states choose electors no more than 41 days after the election. This is partly why the Supreme Court rushed to complete Bush v. Gore on December 12, 2000. The decision halted the count of ballots in Florida, handing the presidency to George W. Bush.” Legal challenges to state elections may result in the same for Trump.

If Congress cannot certify the electoral college votes, Pergram describes the next steps. “If Congress determines there’s a stalemate, the 12th Amendment directs the House to elect the President. This is called a ‘contingent election.’” A delegate from each state casts one ballot. The process would probably advantage Trump, as Republicans have fewer representatives but they cover more states.

“At this point,” Pergram writes, “we expect House Speaker Nancy Pelosi…presuming she is re-elected,…and Vice President Pence, in his capacity as President of the Senate, to co-preside over the Joint Session. Pence’s term doesn’t expire until January 20. And, the 12th Amendment…mandates that ‘the President of the Senate shall, in the presence of the Senate and House of Representatives, open all the certificates and the votes shall be counted’.” Unfortunately, this wording raises another difficulty over which constitutional scholars have debated for years; it does not specify how the votes are to be counted. Pergram points to yet another possible obstacle. “The 12th Amendment also says ‘the person having the greatest number of votes for President shall be President’. But Congress must agree to all of this. And remember, Pence is the one running the show at this stage.”

In short, an incredible mess might well be followed by another incredible mess—one that could set a constitutional precedent. Nonvoters should feel pleased and proud to have played no part in the ugly fiasco of presidential election 2020. “A curse on both your houses” is the sound libertarian position.Author:

Wendy McElroy is a Canadian individualist anarchist and individualist feminist. She was a cofounder along with Carl Watner and George H. Smith of The Voluntaryist magazine in 1982.