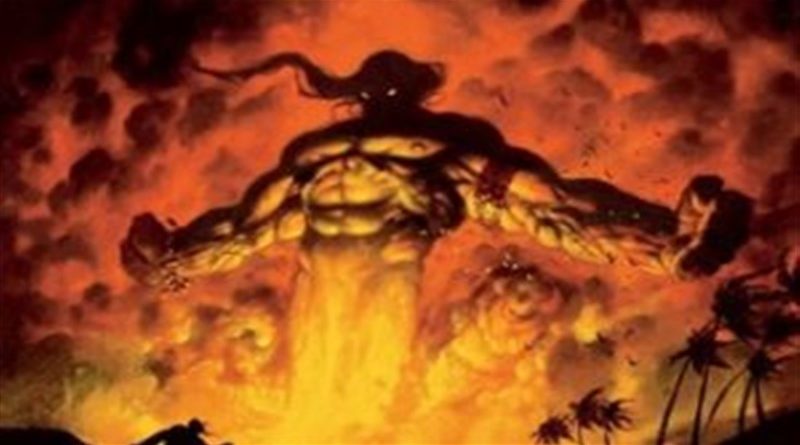 Learn what mystics and prophets have said (often in great detail) about hyper-dimensional entities who attempt to influence the mind of mankind.

have been recognized, discussed and warned about for literally millennia throughout the history of humanity. Naturally, there are many people who scoff at the very idea of such beings, believing them to be fictitious inventions of the human mind. However, the fact that so many cultures, traditions, religions and spiritualities have discussed the nature of these creatures, using different terms but essentially describing the same thing, gives credence to the idea that they exist. We have been cautioned for millennia that humanity is under psychic attack by a group of energetic, discarnate beings that seed thoughts of judgement, separation, anxiety, anger and fear in order to generate loosh (negative emotional energy) that they siphon off as food. In searching for what force is really behind the construction of the New World Order and the grander conspiracy, one is bound to investigate these hyper-dimensional entities, who may be the original handlers, puppet masters and mind control perpetrators manipulating the whole of mankind. This is part 1 of a 2-part series (click here for part 2).

Beyond the Frequency Band of Normal Perception

We have to take seriously the idea that the hidden ruler(s) of this crazy world are invisible, or at least, operate from frequencies beyond normal perception. After all, no one knows exactly from where thoughts originate. If there were a force that could control which thoughts are beamed into the mind, then every single living person would be vulnerable to psychic attack. These hyper-dimensional entities are said to be able to infiltrate your mind, make their voice sound like yours and entice you to do their bidding – all with the aim of generating fear, which is their food. Are they are the “gods” of yore that demanded sacrifice? Are they the evil spirits that possess people? Are they the masters of trickery who continually try to keep us in fear and out of our center of power – our heart? What follows is a list of 10 different traditions and cultures that describe these hyper-dimensional entities using their own terms and ideas.

The ancient Gnostics were named after gnôsis, the Greek word for knowledge or insight. Gnosticism was a loosely organized religious and philosophical movement that flourished in the 1st and 2nd centuries AD. The Gnostics believed that the material world was the result of a primordial error on the part of a divine being (usually called Sophia [Wisdom] or the Logos). They attributed the creation and control of the material world to a semi-divine, ignorant creature known, who was called Saklas (the fool), Ialdebaoth (the blind god) or the Demiurge (from the Greek dêmiourgos which means craftsman, but which the Gnostics meant as the architect or lesser creative force).

In Gnostic mythology/cosmology, both Sophia and the Demiurge are subordinate to the Supreme Being/Cosmos (God). The Demiurge was antagonistic to anything spiritual, and had a group of servants known as the Archons (Greek meaning ruler). The research of Gnostic scholar John Lash reveals that the Gnostics were early mystic shamans who reached high states of consciousness, knew their direct connection with the Cosmos and honored the importance of the female principle (Sophia) to live balanced lives. He concludes that the Catholic Church feared their power, so it killed them and banished the survivors underground.

The Dead Sea Scrolls discovered in Qumran Palestine and the Nag Hammadi Codices discovered in Egypt (both in the 1940s) are important Gnostic texts which expose the truth about the Archons. Here is a quote from the Apocryphon of John, a Nag Hammadi text:

“They sought to overpower humanity in its psychological and perceptual functions… although they saw that human thinking was superior to theirs… For indeed their delight is bitter and their beauty is depraved. And their triumph is in deception (apaton), leading astray, for their own structure is without divinity.”

The Gnostics were postulating the idea of a predatory alien presence that took delight in others’ pain and that used deception as a tool. Disconnected from their own power (“without divinity”), they became parasites that had to hijack the energy of others to survive.

These same forces are called Demons in the Christian tradition. In this famous quote from Ephesians 6:12, the creatures are actually called “rulers” and “authorities”, which directly echoes the language used to describe the Archons in the Dead Sea Scrolls and Nag Hammed texts:

Christianity also contains a tradition of exorcism of evil spirits. The Gospel contains many stories of Jesus casting out the evil spirits. This tradition continues to the current day. Father Gabriele Amorth was a former official in the Vatican who served as exorcist for the diocese of Rome for 30 years. He was also the founder of the International Association of Exorcists.

In pre-Islamic Arabia before the rise of the prophet Muhammad in the 6th century CE, Arabian mythology contains references to the Jinn or Djinn, who were considered to be supernatural spirits (and could be good or bad). Jinn is a classification of a number of different types of supernatural being. The book The Evolution of the Concept of the Jinn from Pre-Islam to Islam describes how they could appear as pure spiritual beings or angels or demons, as indicated by Ibn Manẓūr, in “Lisān al-Arab”:

They could also be tangible creatures, particularly with animal-like characteristics, as stated by The Encyclopedia of Religion and Ethics:

“… were not pure spirits, for they were often represented as hairy and often as having the form of an ostrich or a snake.”

The book mentions 4 specific types of Jinn in the pre-Islamic world:

1. Ghūl: we get the English word “ghoul” from this. The ghuls were desert demons believed to rob graves and devour corpses. They seemed to appear in many different forms, often animalistic. They could appear and disappear “like the light of a torch”. They left a physical corpse behind when killed, thus the poem by Ta’abbata Sharran:

“I spent the night leaning on her, waiting for the morning to see what I caught. Then I found two eyes in an ugly head, similar to the head of a cat with a forked tongue.”

2. Si’lah: The difference between this and the former is not clear to me. They seem to be more sneaky and clever. A story exists of a one marrying and bearing human children. Possible other differences may be that they are active during the day, instead of at night, or that the Se’lah is female, and the Ghūl male. neither seems to be universally respected though.

3. Shiqq: this was a man with only half of a body who would beat a human to death if encountered. From Al-Jāḥiẓ:

“There, a shiqq appeared to him. He had only one hand, one eye, one leg. They recited poetry to each other, then they hit each other, and both of them fell dead.”

4. Shaytan: this will be expanded upon below. The English word “Satan” is derived from this Arabic word. They were noted for being smart, cunning, powerful and generally rebellious.

The Shaytan (plural Shayatin) belongs to pre-Islamic Arabian mythology, however there is a story that Muhammad was tricked by one (although there are debates by scholars over the historicity of this incident), realized it, and came out publicly the next day to correct what he said. In the Quran, there is the story of Iblis, the first Shaytan, who was apparently made by Allah (God) from a fire so pure that not even smoke could mar its beauty. This is interesting, because reference to the Archons as made from smokeless fire crops up repeatedly across different traditions. Iblis refused to bow to Adam (who was after all a mere man made of clay), so Allah banished him from heaven. Iblis swore to take revenge on Adam and all clay-men like him.

Iblis is considered the lord of all Shayatin and is said to have gathered an army of Shayatin and Jinn to persecute mankind. A Shaytan is described as a sweeping force and a whispering voice, visible only to donkeys, who bray desperate warnings when they see it approaching. This again is noteworthy, since this highlights the theme that these hyper-dimensional entities are outside the normal range of normal human perception – but not outside the perceptions of other creatures such as animals like donkeys (or cats), and not outside the range of human perception when a person (through will, intent or even psychedelics) expands his or her perception range.

Sri Aurobindo was an Indian sage who founded Integral Yoga. He wrote about the Archons using the term hostile forces:

“It [the adverse force] is the Power that keeps up ignorance and darkness in the world —it can only be destroyed when mankind is no longer in love with ignorance and darkness. Each sadhak has to push it out of contact with his being. When it has gone from him, then there will be no longer any serious difficulties in his sadhana [practise] … The hostile Forces are Powers of Darkness who are in revolt against the Light and the Truth and want to keep this world under their rule in darkness and ignorance. Whenever anyone wants to reach the Truth, to realise the Divine, they stand in the way as much as possible … Sometimes they possess men in order to act through them, sometimes they take birth in a human body. When their use in the play is over, they will either change or disappear or no longer seek to intervene in the earth-play.”

The Mother, a woman closely associated with Sri Aurobindo and his work, talks about it here as she elucidates upon spirit possession or demonic possession:

“Question: When a being is possessed by a hostile force, what becomes of his psychic?

Mother: It depends on the degree of the possession. Usually it is something progressive. First there is an influence under which one comes … The second: the influence becomes permanent and there is one part of the being which deteriorates, which is constantly under this influence and expresses it. After this, the being which has cast this influence tries to enter that part. Then, usually, this produces a conflict, a kind of inner battle … if one doesn’t know how to resist and doesn’t succeed in shaking off the hold, then gradually the being that has seized upon a part of the person acts like an octopus and spreads its tentacles like that, slowly and everywhere; and finally it is a total possession. At the moment of the total possession, either the possessed person becomes completely unbalanced or he becomes a kind of monster …”

Rudolf Steiner is known for many things including his revolutionary ideas about education. He too was aware of the Archons:

“There are beings in the spiritual realms for whom anxiety and fear emanating from human beings offer welcome food. When humans have no anxiety and fear, then these creatures starve … If fear and anxiety radiates from people and they break out in panic, then these creatures find welcome nutrition and they become more and more powerful. These beings are hostile towards humanity. Everything that feeds on negative feelings, on anxiety, fear and superstition, despair or doubt,  are in reality hostile forces in supersensible worlds, launching cruel attacks on human beings, while they are being fed. Therefore, it is above all necessary to begin with that the person who enters the spiritual world overcomes fear, feelings of helplessness, despair and anxiety. But these are exactly the feelings that belong to contemporary culture and materialism; because it estranges people from the spiritual world, it is especially suited to evoke hopelessness and fear of the unknown in people, thereby calling up the above mentioned hostile forces against them.”

This series is continued in part 2.