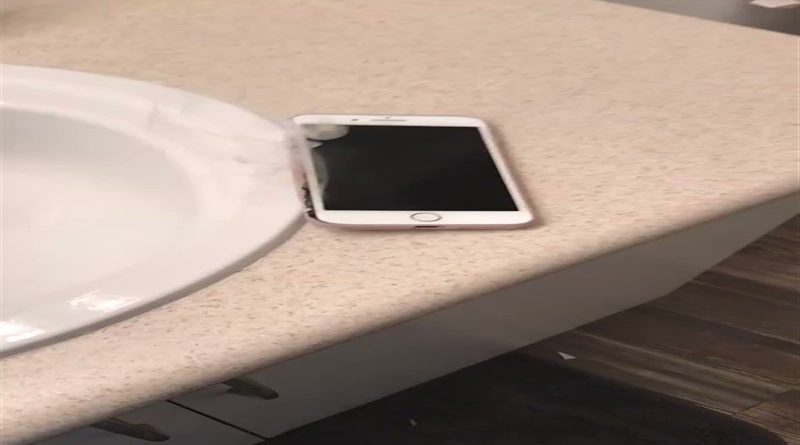 Last September we confirmed that spontaneous pocket explosions were not a desirable feature for smartphones…well, at least not in the opinion of Samsung shareholders who lost nearly $20 billion in market value over just two days after reports first surfaced of the company’s new Galaxy Note7 randomly bursting into flames.

As it turns out, Samsung may not be the only smartphone manufacturer that pushed their batteries just a little too far as Brianna Olivas recently set Twitter ‘on fire’ after posting a video of her smoking iPhone 7 Plus.  The video almost immediately went viral and has received well over 1.25mm views and 27k retweets since being posted.  Per Mashable:

Brianna Olivas says her rose gold iPhone 7 Plus exploded and began smoking Wednesday morning when her boyfriend grabbed his phone and began recording. The video, which Olivas shared on Twitter later that day, shows smoke pouring out of one side of the phone and the iPhone’s case melting away.

Olivas says the trouble began the day before when her iPhone 7 Plus, which she bought from Sprint in January, wouldn’t turn on. She took the phone to an Apple Store where employees ran tests and told her everything was fine. The phone appeared to be working normally again.

That changed the next morning, she says, when her phone apparently caught fire while sitting on a dresser.

“The next morning I was asleep with my phone charging next to my head, my boyfriend grabbed the phone and put it on the dresser,” she said via a direct message on Twitter. “He went the the [sic] restroom … and from the corner of his eye he saw my phone steaming and [heard] a squealing noise. By the time he got over to the phone it had already caught fire, he quickly grabbed the phone and threw it in the restroom … as soon as he threw it in the restroom is [sic] blew up and more smoke started coming out of the phone.“

So my IPhone 7 plus blew up this morning

was not even using it, literally no explanation for this

And here is the aftermath…

So my IPhone 7 plus blew up this morning

was not even using it, literally no explanation for this pic.twitter.com/sQ8CJt4Y69

Now the only question is whether Brianna just managed to blow up more than her iPhone 7 and the Twittersphere?