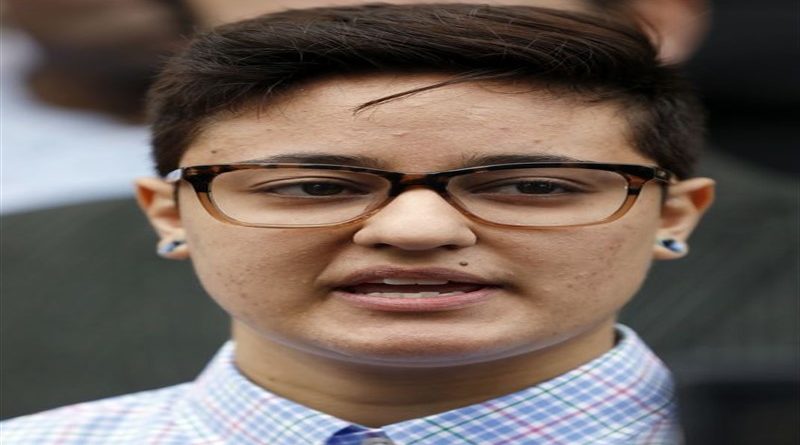 Moments after an immigrant spoke out about her fears of deportation, she was detained by Immigrations and Customs Enforcement.

Daniela Vargas, 22, was detained by ICE agents Wednesday morning, shortly after speaking at a news conference in downtown Jackson, according to her attorney, Abby Peterson.

The news conference was hosted by local immigration attorneys, churches and the Mississippi Immigrants Rights Alliance to bring attention to families impacted by deportation.
Vargas’ brother and father were detained outside their home by ICE agents in February. Vargas hid in the closet. When she was discovered by agents, she was temporarily handcuffed and then released.

Vargas was 7 years old when her family came to America from Argentina, placing her under the Deferred Action for Childhood Arrivals, or DACA, immigration policy. Under the policy, DACA recipients have to reapply every two years. Vargas’ DACA is expired but her renewal application is pending.

Peterson said she told agents via telephone Vargas had a pending DACA case. However, agents reportedly told Peterson that Vargas was a “visa overstay” and will be detained.

Vargas has no bond and is in ICE detention.

Since she came into the country on a visa waiver program, Vargas could be processed without a hearing, Peterson said.

Thomas Byrd, spokesman for ICE, would not immediately comment.

After her father and brother were detained, Vargas previously told The Clarion-Ledger she planned to go into hiding. She came out of hiding to speak at the conference.

Nathan Elmore, an immigration attorney at Elmore & Peterson in Jackson, said there are countless people throughout Mississippi who are scared of being deported. Elmore said the most common question he is asked is how undocumented families can protect their children.

“That’s a hard question for me to answer,” Elmore said. “As a lawyer, there’s certain things we can do, certain emergency measures that can be taken but in the end, no one can replace a parent.”

“They’re people just like you with the same concerns and the same fears that many of us have,” he said. “They have desires to be together as a family unit.”

Vargas told the crowd, despite her father and brother likely being deported, she still hoped to live and work in America.

“Today, my father and brother await deportation while I continue to fight this battle as a DREAMer to help contribute to this country, which I feel is very much my country,” she said.

DREAM refers to the Development, Relief, and Education for Alien Minors Act’, a main provision of which is to provide permanent resident status to young undocumented immigrants.

As a friend drove Vargas away from the news conference, their vehicle was pulled over by ICE agents, Peterson said.

Agents reportedly told Vargas, “You know who we are, you know what we’re here for.”

Vargas was immediately detained and taken into custody. Her friend was released.

Before being detained Wednesday, Vargas said she planned to move out of state with her mother and pursue her dream of being a university math professor.

“Now, I’m not so sure my dream will continue to develop,” she said. “A path for citizenship is necessary for DACA recipients but also for the other 11 million undocumented people with dreams.”