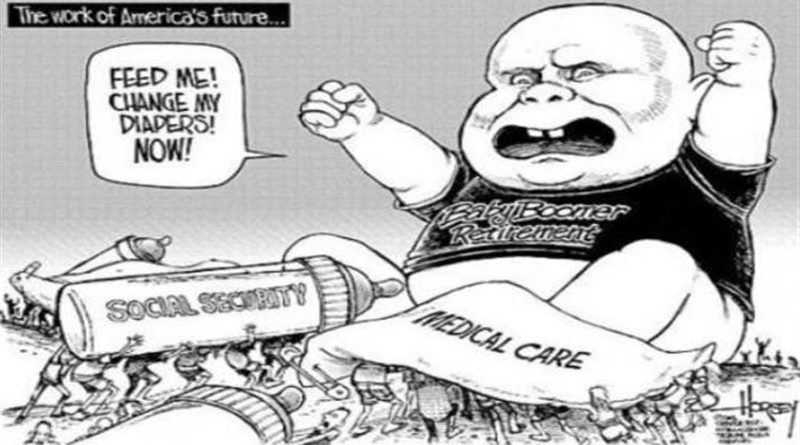 According to a new report from the Government Accountability Office, the federal government is increasingly garnishing Social Security benefits to help cover student loans payments owed by baby boomers.  According the Wall Street Journal, a total of $1.1 billion has been garnished since 2001 with $171 million being collected in 2015 alone.

The government has collected about $1.1 billion from Social Security recipients of all ages to go toward unpaid student loans since 2001, including $171 million last year, the Government Accountability Office said Tuesday. Most affected recipients in fiscal year 2015—114,000—were age 50 or older and receiving disability benefits, with the typical borrower losing about $140 a month. About 38,000 were above age 64.

The report highlights the sharp growth in baby boomers entering retirement with student debt, most of it borrowed years ago to cover their own educations but some used to pay for their children’s schooling. Overall, about seven million Americans age 50 and older owed about $205 billion in federal student debt last year. About 1 in 3 were in default, raising the likelihood that garnishments will increase as more boomers retire.

“I believe this is the tip of the iceberg of what may be to come if we don’t work harder on this problem,” said Sen. Claire McCaskill of Missouri, the top Democrat on the Senate Special Committee on Aging.

Of course, the mere suggestion that people should be responsible for repaying debt they’ve incurred was enough to throw Elizabeth Warren into a tailspin as she described the idea of garnishing social security benefits as “predatory.”

The report showed garnishments left thousands with Social Security checks below the poverty line, prompting Sen. Elizabeth Warren (D., Mass.) to call the practice “predatory.” Both lawmakers said they will push legislation to ban it.

But consumer advocates and some congressional Democrats say the government’s tactics have become too aggressive, targeting many borrowers who are destitute and have no hope of repaying. Most Social Security recipients rely on their checks as their primary source of income, other research shows.

Meanwhile, the WSJ points out that Obama’s “income-driven repayment” (IDR) plans only serve to make the student loan problem worse.  Since the payment plans only cover a portion of monthly interest payments, debt balances continue to grow over time leaving borrowers with even larger debt balances as they reach retirement age.

Daniel Pianko, a managing director of University Ventures, which invests in for-profit and nonprofit schools, says the government may be worsening the troubles of older borrowers by promoting programs that set monthly payments as a share of borrowers’ earnings. Payments under “income-driven repayment” programs frequently cover only part of the interest and not the principal, allowing balances to grow.

In that sense, the income-driven repayment programs have the same effect as payday lenders, trapping poor borrowers in a growing amount of debt.

“Every month and every year the loan balances go up, which means by definition this problem will only get worse,” Mr. Pianko said.

We just wrote about another Government Accountability Office report that blasted the Education Department’s understanding of basic mathematics and accounting concepts after finding the department drastically underestimated the costs of Obama’s student loan forgiveness programs.  The 100-page report entitled “Federal Student Loans:  Education Needs to Improve Its Income Driven Repayment Plan Budget Estimates” found that taxpayers could be on the hook for $137BN of student loans to be forgiven over the coming years as a result of Obama’s executive actions on IDR plans.

Oh well, what’s another $50 billion or so…we hear a lot of baby boomers vote so better give them what they want.