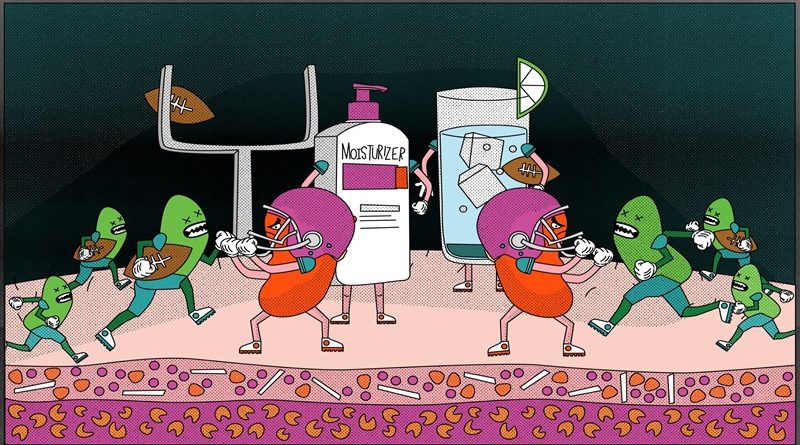 The Scientific Truth About Toxins

Ifyou’ve ever read the marketing copy for anything wellness-related, you’ve probably been alerted to the fact that our bodies are full of toxins. Absolutely loaded with them. We’re basically walking toxin containers, continually in need of cleanses, scrubs, masks, soaks, and drinks to expel them from our pores, flush them out of our insides, and break them up wherever they lurk.

That toxins are ever-present—and bad—is made perfectly clear. Less clear, however, is what, exactly, these toxins are.

For the most part, we’re using the word “toxin” all wrong, says Pascal Imbeault, a cellular biologist at the University of Ottawa. “Toxins are substances produced by plants and animals,” he explains. (They’re also produced by our cells; more on that in a bit.) What most people think of as toxins — harmful chemicals that our bodies absorb through our environment or the food we eat — are actually toxicants. “These are called persistent organic pollutants,” Imbeault says, and they include things like fire retardants, pesticides, and chemicals called polychlorinated biphenyls, or PCBs, used in electronics. And unless you live far out in the woods and severely limit your contact with modern society, Imbeault says these compounds are practically unavoidable.

But exactly how one does one get them out of the body? This, Imbeault says, is where the bigger misunderstandings tend to come in. While Imbeault’s research has found that minuscule amounts of these chemicals can be found in sweat, for example, most people are ingesting many more toxicant molecules daily than they could possibly sweat out, in part because of the way many toxicants are stored in the body.

Some of these molecules, Imbeault explains, attach to lipids, or fat cells, which is how they get into our bodies in the first place. “Any food item containing lipids is contaminated,” he says. “The foods at the top of the food chain are the most contaminated.” When we eat fatty things like meat and fish, those toxicants end up in our lipid cells. And they aren’t all that water soluble, so no amount of time spent in a sauna will make a major impact.

It may seem, then, like the natural solution to contaminated fat cells is weight loss. But Imbeault’s research has found that shedding pounds doesn’t make a dent in the toxicant levels in your body. “We’ve taken fat biopsies pre- and post-weight loss to measure pesticides and PCBs,” he says. “The hypothesis was that as the fat reserves decrease, the toxicant levels would go down, but it’s the opposite. Your fat tissue cells get more concentrated with toxicants.”

What you can do is limit your intake of the lipids where these toxicants are stored. “The only real way to do it is to stick to a diet that does not contain a lot of lipids,” Imbeault says. “A plant-based diet is much lower in both lipids and toxicants.”

In addition to the man-made toxicants hanging around the environment, there are an immense number of natural toxins that we come into contact with every day. Pretty much every living thing produces some sort of waste product. Some of those byproducts can be harmful to humans, and those can be accurately called toxins.

We’re covered in bacteria and other microorganisms — some beneficial, some not — but the body has a pretty effective self-defense system of healthy bacteria defending against nasty ones.

“On the outermost surface of the skin, there’s a microbiome composed of bacteria and fungi and yeast,” says Lloyd Scott Miller, vice chair for dermatology research at the Johns Hopkins School of Medicine. “These serve as a barrier that protects us from pathogenic organisms that can cause infection or inflammation.” Staphylococcus epidermidis, for instance, is a bacterium that lives on human skin without producing anything toxic to us. Part of its role is protecting against other species of Staphylococcus, which, Miller explains, can produce toxins that cause cell death or damage.

Healthy skin has a thriving, diverse biome on its surface, but unfortunately, that’s not something we have much control over. Not yet, anyway.

The best way to keep your skin healthy is simple: moisturize.

“I wish we had a probiotic you could rub into the skin to increase diversity,” Miller says, “but we’re still in the beginning stages of understanding how to impact the skin microbiome.”

Those organisms aren’t the skin’s only defensive barrier against toxins. One layer below the skin’s outer surface is an epidermal layer made up of keratinocytes, which are full of peptides that serve as natural antibiotics, killing pathogens and toxins.

To be an effective toxin screen, skin has to be healthy. “When the skin isn’t healthy, keratinocytes that normally hold the skin tight together aren’t tight anymore, so toxins can get through and lead to inflammation and allergies,” Miller says. “There are a whole bunch of genetic defects that lead to a defective skin barrier, and exposures like UV light can damage it, too.”

The best way to keep your skin healthy—and to keep your keratinocyte barrier as impermeable as possible—is simple: moisturize.

“We know dry skin is particularly susceptible,” Miller says. “The barrier is not as strong as it is in hydrated skin.” He suggests a moisturizer that’s thick and oily, as opposed to thinner lotions with a high water content. And, Miller adds, the fanciest product isn’t always the best one: “The fewer ingredients, the better.”

It’s not just your skin that’s working to protect you against toxins and toxicants. Your body already has a built-in system for removing a lot of them in your kidneys.

Unlike the toxicants that are stored in lipids, a number of environmental pollutants, including the bisphenol A (or BPA) used in many plastics, are much more water soluble and can be excreted through your urine. The kidneys filter your bloodstream, removing both toxins and toxicants and sending them straight to the bladder.

The kidneys are responsible for processing both the byproducts your body makes naturally — acid, urea, and metabolic waste — and heavy metals you may ingest, like mercury and lead, and any other foreign substance or drug you take, explains Leslie Gewin, assistant professor of nephrology at Vanderbilt University Medical School.

To help your kidneys do their job, Gewin says, the healthiest thing you can do is stay hydrated. But in terms of extra detoxing, there’s not much more you need to do — and, in fact, you probably shouldn’t.

“You hear about these ‘cleansing’ things, like a detox enema,” Gewin says. “An enema will clean out your GI system, but there are a lot of natural and foreign toxins an enema won’t do anything to change.”

“Nephrologists also worry about patients taking herbal supplements,” she adds. “Not all of them are bad, but they’re also not regulated. Just because something is a plant doesn’t mean it’s without harm. Some of the worst toxins come from plants.”

Assuming you’re moisturizing, eating well, and drinking plenty of water, your body is dealing with its toxins and toxicants naturally.

“Do we need to do something extra? Really, the answer is no,” Gewin says. “Your body has evolved to remove toxins on its own, and it does that very well.”