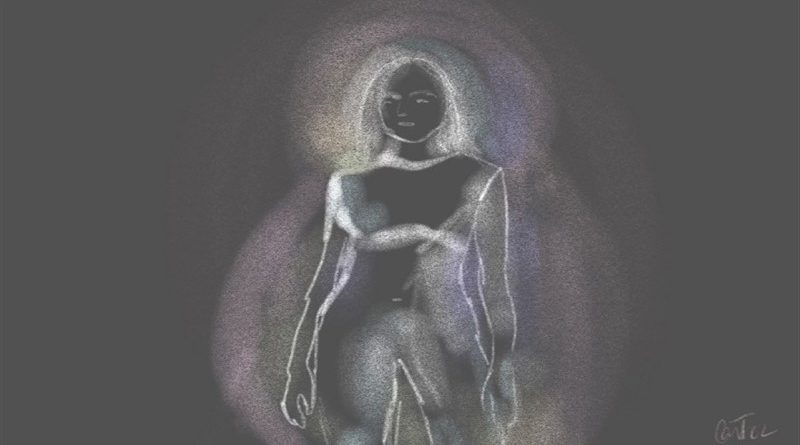 I remember the very instant the blood clot careened into my heart.

The palpitations were like nothing I’d ever felt, and the taste of blood filled my mouth. Milliseconds later, like a ricochet of bullets, the clot exploded in my lungs. I fell to the ground, gasping for air, each breath more shallow and pained than the one before. I am dying, I thought with a clear certainty that I’ll never be able to explain. My systems were shutting down, one after the other, and my body instantly knew what my mind could not refute.

I did not feel fear or panic as one might imagine. Instead, I became laser focused on survival. As I lay sprawled out on the pavement with my dog by my side, my attention became fully devoted to reading the symptoms overcoming my body and figuring out what to do next.

This is the first time I’m sharing what it really felt like to almost die. The experience has always felt too personal to talk about. I’ve written about an awareness it brought me, but that hardly scratched the surface. I just haven’t been sure if I could tell the full story in a way that sounded believable and sane, and more importantly, that honored the weight of the experience. For the last nine years, this has eluded me.

But each year that passes, I see friends and family struggle with the loss of loved ones. I can’t help but feel that my near-death experience gives me insight that might alleviate the pain of imagining the final moments — what might have been going through their minds, whether they made it to the other side in peace. So at the risk of sounding absurd, condescending, or irrational, I’m going share what it felt like to almost die — and why I believe you need not worry about those final moments.

Realizing that I was dying was like being pushed into a pool. You have no thought but to hold your breath and start swimming. It was the most out of control I’d ever been in my life, yet the only option was to succumb peacefully. I could hear the percussion of my heart beating wildly, recklessly. My breath only reached my trachea now, its pathway closing in rapidly. My palms spread open to the sky, just as my dog moved to stand over me. I am here with you, I am here to protect you.

She is an angel, I thought with that same clear certainty.

She moved her body next to me, and I looked up to the sky in what I thought would be my final moments.

I will never look at clouds the same way again. Though usually only children take enough care to notice, there is so much light and vibrance living within them. I watched as they danced above me, like the hundreds of times I had watched them as a kid, only this time I saw something new. No, I felt it. A feeling of meaningfulness. Not the religious clip art kind of meaning, but a deep sense of calm derived from purpose. Energy derived from honesty. Gracefulness derived from confidence.

Suddenly the clouds opened, like a scene from a movie. A ray of light beamed down from the sky to the pavement several feet in front of where I lay.

My eyes fixated on the point where the light met the ground. I felt the wind begin to blow, at first lightly, and then strongly. A swirl of leaves appeared, bathed in the light beam, and began dancing. There were reds, and oranges, and browns, and I could feelthe colors. The reds felt like passion. The oranges like warmth. The browns like home. They did twirls upward and downward, around and across each other. I felt the edges of my mouth rise, and without conscious effort, I smiled. These leaves were just leaves before; I’d never known they were this beautiful.

I was overcome with the emotion of forgiveness: not for others but for myself.

You might think all of this was the lack of oxygen. But actually, my breath was deepening with each second. Soon, my breathing had returned to near-normal. My heart stopped palpitating. My body was healing itself as each wave of experience washed over me.

In this moment, I felt something that stayed with me intensely for days, like an emotional hangover: I felt completely free of worry. It sounds simple, but I’m not sure we ever experience this feeling in life. From childhood to adulthood, worry persists in varying forms and amounts. The experience of mental weightlessness showed me just how much unnecessary burden we take on as part of the human condition.

I was overcome with the emotion of forgiveness: not for others, but for myself. I forgave myself for taking on so much guilt, stress, and fear. In that moment, I felt a peace and buoyancy that words cannot describe. I don’t know where I stand with religion or spirituality, but it was as close to God or truth or the universe as I have ever been. (Maybe those are all the same thing?)

The leaves stopped dancing. The clouds moved in, shutting out the luminescence. It started lightly raining. I could hear the rain, and feel the rain, but it did not feel wet. Rather, it felt contemplative, like taking a step back to breathe. I heard each raindrop that hit the ground, a symphony of echoing beads all around me.

And then, a few moments later, it stopped raining. Complete silence, as the clouds parted again and the sun shone through. This time not a beam, but a broad lightness. It felt like the moment when a movie ends and the theater lights come on, as you adjust from the make-believe cinematic world back into the real one.

As I lay there, transported back into the “real world,” I was unsure what to do.

And then I heard something.

Now you can stand, it said. And so I did.

Walk back to your house, it said. And so I did, dog by my side.

The thing is, it wasn’t something I heard with my ears. I heard it some other way. And yet, it was loud and clear and obvious.

For the first time in my life, as I lay in the ICU with everything at stake, I felt okay.

Hours later, I was lying on a hospital gurney in the emergency room. The doctor said I’d had the most massive pulmonary embolism he’d ever seen. I should not be alive, he said. Despite all his belief in science, he could only describe me as “a miracle.” He taught medical school, and he said, “I’ll be teaching your case for a long, long time.”

My family and husband rushed to my side while I remained in the ICU for several days, and the doctors remained uncertain if I would live. While I’d made it through the most precarious part, there was still a chance the blood clot would break free again, a complication that could be fatal.

I watched the pacing, the worried expressions, the note-taking each time the doctor came in, the whispered hallway discussions. Of course I understood why they were scared. And yet, I still was unafraid. In fact, I was overcome with a serenity I’d never before had. I felt safe, no matter what happened. For the first time in my life, as I lay in the ICU with everything at stake, I felt okay.

That in life or in death, everything would be okay.

That in life or in death, beauty remains.

That in life or in death, love remains.

That love never, ever, ever dies. Ever.

But I know all of it sounds ridiculous. So I simply reply, “I’m sorry for your loss.”

I’m sharing this story now not just in hopes that it helps others move past death, but so it might help us live too. You see, in almost losing my own life, this much became clear: We are all taking on too much burden, guilt, and shame. The purpose of life, no matter where you stand on religion or spirituality or practicality, is simply to live.

The truth revealed itself. I didn’t actually control anything, nor was it my burden, guilt, or shame to take on. It was simply… life.

Whether we try to control it or not, just like the clouds and the sun and the wind and the rain, life changes. Just as the leaves change from green to yellow to red to brown, the people in our lives change too. Sometimes, these things change together. Other times, they change apart. The source of all my burden, guilt, and shame was trying to avoid the change of seasons and tides. Trying to keep things together to fit a narrative of how it was “supposed to be.”

But as I lay on that concrete, unable to breathe, my heartbeat taking full liberty, the truth revealed itself. I didn’t actually control anything, nor was it my burden, guilt, or shame to take on. It was simply… life. I was just a leaf dancing in the wind. And for me, “supposed to be”meant following the winds of change, wherever they might take me. That day, the winds of change took me somewhere many people go, but few return from.

The experience was a deeply personal one, to be sure. But I have to believe it had a purpose beyond myself. It must also be about sharing what I saw, what I felt, and maybe what I know.

Because death is too beautiful not to understand it as such.

And life is too precious not to live it while you still can.