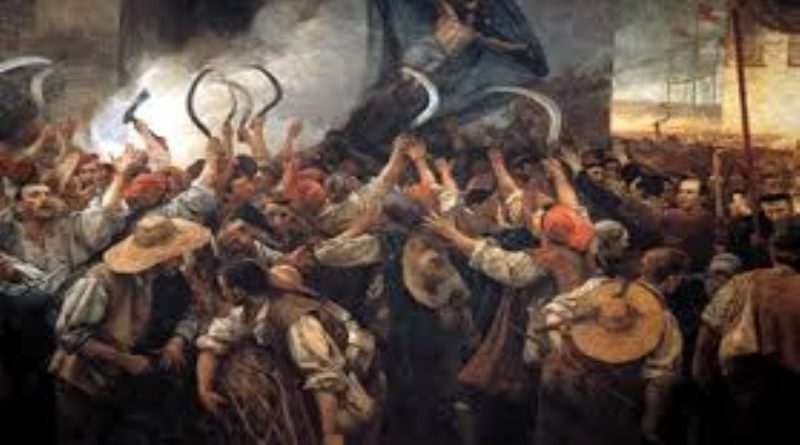 Submitted by Patrick Buchanan via Buchanan.org,

That hysterical reaction to the travel ban announced Friday is a portent of what is to come if President Donald Trump carries out the mandate given to him by those who elected him.

The travel ban bars refugees for 120 days. From Syria, refugees are banned indefinitely. And a 90-day ban has been imposed on travel here from Iraq, Syria, Iran, Libya, Sudan, Somalia and Yemen.

As of Monday, no one was being detained at a U.S. airport.

Yet the shrieking had not stopped. All five stories on page one of Monday’s Washington Post were about the abomination. The New York Times’ editorial, “Trashing American Ideals and Security,” called it bigoted, cowardly, xenophobic, Islamophobic, un-American, unrighteous.

This ban, went the weekend wail, is the “Muslim ban” of the Trump campaign. But how so, when not one of the six largest Muslim countries — Indonesia, India, Pakistan, Bangladesh, Egypt, Turkey — was on the list? Missing also were three-dozen other Muslim countries.

Of the seven countries facing a 90-day ban, three are U.S.-designated state sponsors of terror, and the other four are war zones. Clearly, this is about homeland security, not religious discrimination.

The criterion for being included in the travel ban appears to be that these places are the more likely breeding grounds for terrorists.

Yet there are lessons for the Trump White House in the media-stoked panic and outrage at the end of his first week in office.

First, Steve Bannon’s observation that the media are “the opposition party,” is obviously on target. While Sen. Chuck Schumer was crying on camera that the ban was “un-American,” the media were into the more serious business of stampeding and driving the protesters.

A second lesson is one every White House learns. Before a major decision is announced, if possible, get everyone’s input and everyone on board to provide what Pat Moynihan called the “second and third echelons of advocacy.” Those left out tend to leak.

A third lesson Trump should learn is that the establishment he routed and the city he humiliated are out to break him as they broke LBJ on Vietnam, Nixon on Watergate, and almost broke Reagan on the Iran-Contra affair.

While the establishment may no longer be capable of inspiring and leading the nation, so detested is it, it has not lost its appetite or its ability to break and bring down presidents.

And Trump is vulnerable, not only because he is an envied outsider who seized the highest prize politics has on offer, but because his agenda would cancel out that of the elites.

They want endless immigration from the Third World to remake America into the polyglot “universal nation” of Ben Wattenberg’s utopian vision. Trump’s followers want back the America they knew.

Our foreign policy elites see democratization as a vocation and an autocratic Russia as an implacable enemy. Trump instead sees Moscow as a potential ally against real enemies like al-Qaida and ISIS.

There is another reason for the reflexive howl at Trump’s travel ban. The establishment views it, probably correctly, as the first move toward a new immigration policy, built on pre-1965 foundations, and rooted in a preference for Western-Christian immigrants first.

When the Times rages that “American ideals” or “traditional American values” are under attack by Trump, what they really mean is that their ideology and agenda are threatened by Trump.

We are headed for a series of collisions and crises, and what has happened in Europe will likely happen here. As the Third World invasion and growing Islamization of the Old Continent — which the EU has proven unable to stop — has discredited centrist parties and continuously fed a populist-nationalist uprising there, so may it here also.

And Trump not only appears to have no desire to yield to his enemies in politics and the media, he has no choice, as he is now the personification of a surging Middle American counterrevolution.

Undeniably, there are great numbers of Americans who agree with the libels the Times showered on Trump and, by extension, his backers whom Hillary Clinton designated “the racist, sexist, homophobic, xenophobic, Islamophobic … deplorables.”

But by whatever slurs they are called, Middle Americans seem prepared to fight. And history shows that such people do not calmly accept the loss of what is most precious to them — the country they grew up in, the country they love.

They have turned to Trump to lead them. Why should he not, having been raised up by them, and knowing in his own heart what the establishment and the media think of him and would do to him?

Ten days in, and already it is “Game On!”