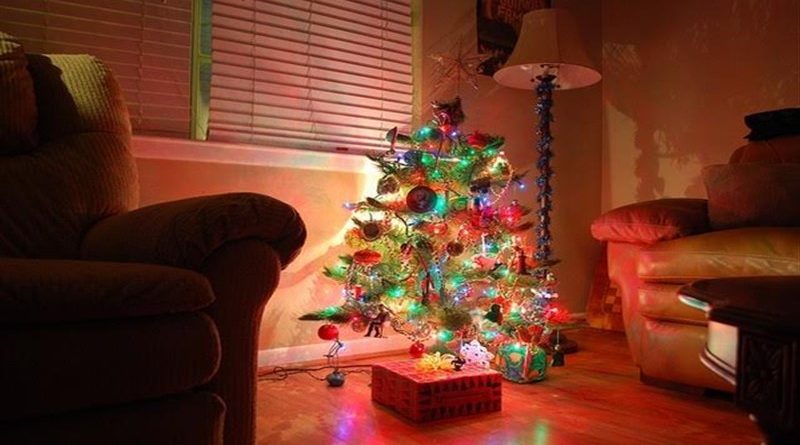 Christmas, if not a time for utter extravagance, is at least a season for pulling out some of the stops. This year is the first that my daughter and her husband will spend in their new home, and what better way to highlight that vaulted ceiling than with a glorious fir tree? Yes, it is a monster — one that would strain the limits of many a household measuring tape, as it fills their home with that aroma of unspoken promise that can best be christened: “magical.” And as the magical points its exquisite finger towards the miraculous, should we then be surprised when creation, in all her exalted grandeur, leaves her trail of breadcrumbs to the very door of the transcendent? Can a tree stand as a living metaphor for hope – of that abounding life that is ever so faintly visible behind this tangible veil of scented wood and joyous expectations? Can nature serve to direct that elusive longing that nothing in this world can possibly satisfy?

The Christmas tree is no less than a central cultural icon fused into our treasury of Western lore. Countless stories, songs, and films have been fitted around the blazing hearth and a tree of varying magnificence. It has been: a “straight-man” for the most raucous slapstick comedies, a target of irresistible interest for Fido and Kitty, and a perennial tear-jerker when children point to it and remind us that “whenever a bell rings, an angel gets his wings.” It is the source of exuberant delight for every child who ever lived under the aura of its grace. And as it is lit with the incandescent heirlooms that are handed down from generations, every fresh new tree carries in its boughs the traditions and memories that evoke not only what is endearing to us, but what we pray will come to pass as our best intentions resolve into Christmas Day.

So, how odd that when we consider Christmas in its purest form, another tree should grasp hold of our imaginations: the tree of Calvary. In calling upon the gospels, how terrible was the punishment inflicted upon the quivering flesh of a bruised and blood-drenched remnant of a man who was wholly without guile? And after rough soldiers pierced his side, quickening a torrent of water and blood, was not Jesus’ lifeless form hurriedly taken down so that the memory of Him might be buried and forgotten? Was it not written, “Cursed is everyone who is hanged on a tree?”

On this tree of inexpressible woe, Christ took the worst that mankind had to offer and transmuted our poisons into the promise of joy everlasting — but only after first fulfilling a ministerial life of obedient perfection. Our human vocabulary lacks the words to describe this greatest action in human history, and how a poor man acquainted with the deepest of sorrows should perform it with humility beyond measure.

This singular death and resurrection — the culmination of a perfect atonement between God and man, comes with its own unique set of mysteries. The King of the Universe, lashed and nailed to the axis of a roughhewn tree, was that same King swaddled helplessly in a filthy wooden box used to feed beasts. The Lord of Creation, scourged and murdered by his enemies, was that same Lord who was whisked away to Egypt to escape Herod’s slaughter of the newborns. Both similitudes bring to the forefront, in no uncertain terms, the controlled power of divine meekness in the interest of God’s all-encompassing redemptive plan. Knowing this, how astonishing that an infant, arriving in the humblest of circumstances, should one day be the pivotal figure who prevailed against the very gates of Hell.

If one were to be honest, the very idea of the incarnation of God into man defies serious comprehension, once one fathoms the immense gulf that separates both parties. Yet, the love of “the Lamb slain before the foundations of the world” for us can only be fully understood in the figure of Jesus. Having assented to bridge that gulf, He shared in our burden of flesh to purchase back the relationship we had cast aside. Having first been “born to die” and then “risen to reign,” the triumphant God-Man proclaimed the good news across the full panorama of His creation — with words and deeds almost too beautiful to behold. As the first fruits of a new type of life, Jesus blazed the path so that we might then follow. Indeed, are not truth, love, forgiveness, justice, and mercy made coherent in God’s sublime affliction on that precious tree? And by that same Christmas babe’s suffering, are we not then the heirs to so great a kingdom, if we would but throw down our rebel arms, and be healed?

This Christmas will be more precious to me than any that have ever passed before. The lamb that God has given me these last 35 years looks as lovely to me as she first did sitting beneath our first “Charlie Brown” tree, but her eyes betray their weariness as she anxiously looks ahead to tomorrow’s suffering. The hard lessons we have learned about love, life, and God have been etched in the lines and scars of a drama that has moved so very fast — in a dream that is even now coming undone. And this year, our children, who are amongst the brightest and strongest of this crooked age, have done the heavy lifting in loving regard, as we approach in unison our dreaded appointment with grief.

So on this Christmas day, I need no machine or bauble that this jaded world has to offer. And since no doctor can summon up the cure we so desperately need, I require a miracle so stunning that men might see it and believe. O God, who guides the sun and stars, and raises up the weary and afflicted who call out to you in their time of deepest need: Grant us one more dance around thy procession of days. Allow us one more celebration beneath the arms of that wonderful tree.

Glenn Fairman writes from Highland, Ca. He can be contacted at arete5000@dslextreme.com and followed at www.stubbornthings.org.