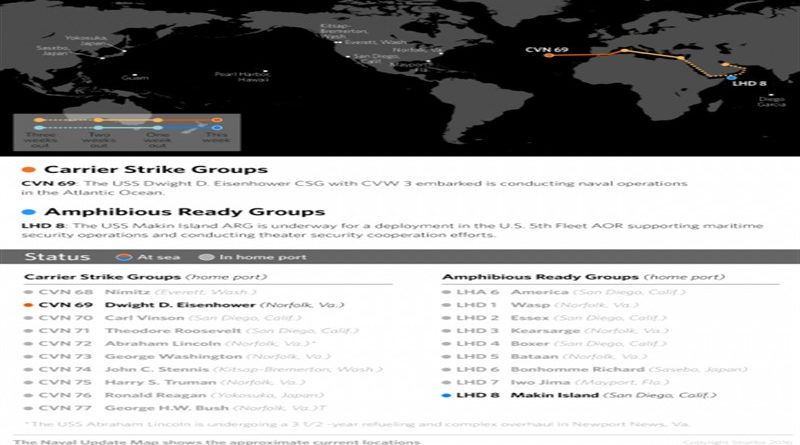 For The First Time Since World War II, No US Carriers Are Deployed Anywhere In The World

Last weekend, when commenting on China’s public demonstration of its one and only aircraft carrier, which China then proceeded to sail in close proximity to Taiwan to make a clear diplomatic “statement”, we noted something tangentially troubling: ” a quick look at the latest positioning of US aircraft carriers, amphibious ready groups, and other navies around the globe shows a gaping hole in the region of the East or South China Sea, and even in proximity to Japan, a place where the US navy traditionally has maintained at least one carrier group.  In fact, according to Stratfor, the only active carrier group is USS Dwight D. Eisenhower CSG, conducting naval operations in the U.S. 6th Fleet area of operations in support of U.S. national security interests in Europe.”

As it turned out, the Eisenhower carrier group was on its way back to dock in Norfolk, VA, which means that for the next several weeks, not only will there be no U.S. Navy aircraft carrier in the Middle East or the South China Sea, but as Fox News reports, “there will be no American aircraft carriers deployed at sea anywhere else in the world, despite a host of worldwide threats facing the United States.”

The absence of a deployed U.S. Navy aircraft carrier, long seen as a symbol of American power projection, is noteworthy. According to Fox, it is believed to be the first time since World War II that at least one U.S. aircraft carrier has not been deployed.

As it further reports, the carrier USS Dwight D. Eisenhower and her strike group returned to Norfolk, Va., Friday following a seven-month deployment. The Ike launched hundreds of airstrikes against ISIS in Iraq and Syria from both the Mediterranean Sea and the Persian Gulf. Two destroyers in the carrier’s strike group also saw combat. The USS Nitze and USS Mason were attacked in the Red Sea when allegedly Iranian-backed Houthi forces in Yemen launched cruise missiles, which were intercepted by the Mason. A retaliatory strike by the Nitze destroyed the radar installations in Yemen in October, even though in the meantime speculation emerged that the attack may have been coordinated by Saudi interests in an attempt to stage another “false flag” attack on US military assets.

The latest summary of US naval forces around the globe as of the last week of December is shown in the map below courtesy of Stratfor. As of this moment, the Eisenhower has crossed the Atlantic and is back at Norfolk base.

The Eisenhower’s replacement carrier, the USS George H.W. Bush, was delayed by more than six months in the shipyards and will not be able to replace the Ike well into 2017, according to Navy officials.

While there is no U.S. aircraft carrier in the Middle East right now, there is a large deck U.S. Navy amphibious assault ship, the LHD-8 Makin Island, with thousands of Marines on board as well as helicopters and some jets to respond to a crisis, according to officials.

Still, before it becomes the topic of a twitter rant by the President-elect and his opponents, the Navy told Fox News the U.S. military has other jets available to make up for the aircraft carrier gap in the Middle East and elsewhere in the world. The Navy can also “surge” a carrier now in port to deploy if necessary.

“We are not going to discuss the timing of operational movements of carrier strike groups into and out of the U.S. Central Command area of responsibility,” said Capt. Terry Shannon, a U.S. Naval Forces Central Command spokesman, in a statement to Fox News. Centcom is tasked with control over all U.S. forces in the Middle East and Afghanistan.

It’s not the first time there was a carrier gap in the Middle East. Last fall, the U.S. Navy relied on a French aircraft carrier to fill the void when the USS Theodore Roosevelt returned home. At the time it was the first gap in carrier coverage in the Middle East since 2007.

Other factors contribute to the U.S. Navy not having an aircraft carrier deployed anywhere in the world right now. From 2011 to 2013, the Navy maintained two carriers in the Persian Gulf on the orders of Centcom’s then-commander, Gen. James Mattis, who is now President-elect Donald Trump’s pick for defense secretary, which likely means that the current carrier gap is temporary until Mattis takes his post after the Trump inauguration.

The congressionally mandated budget cuts known as sequestration have also been felt on the waterfront since 2011. After billions of dollars were cut from the Navy’s budget, ships such as the George H.W. Bush were forced to prolong their time in the shipyards, which had a ripple effect down the line. If the Bush had left the shipyard on time, she would have relieved the Ike in the Gulf or the Mediterranean, officials tell Fox News.

Fox News reproted that it recently flew out to the USS George H.W. Bush 40 miles off the coast of North Carolina to see the crew’s final tuneup. With jets landing every 60 seconds, the flight deck crew worked on getting the time between “traps” (landings) down to 40 seconds. Aboard the ship, 18- to 22-year-old men and women work 14 hour days on the flight deck, with little rest — all this before deploying and potentially dropping live rounds on ISIS.

“This is the military equivalent of spring training, because once we complete this at the end of December, then we’ll be going forward and it’ll be real forces that we’ll be going flying with and against,” said Rear Adm. Kenneth Whitesell, commander, Carrier Strike 2, interviewed on his perch above the four-acre flight deck known as “Vulture’s Row.”

In addition to fighting ISIS, the ship’s commanding officer says his crew will be ready to deal with a resurgent Russia or China if necessary.

“While we don’t have any emergent or pending conflicts with them, certainly, it is fair to say that we have divergent interests in many cases. and so we need to be prepared to understand how we will react to that if necessary,” said Capt. Will Pennington.  The Bush recently made history when on Aug. 8, 2014, a pair of F-18s from the carrier launched the first airstrikes against ISIS in northern Iraq. Now, two and a half years later, the ship is headed back to the fight against the Islamic State terror group.

“That doesn’t mean that three months or six months from now, that will be the priority for our country. So we have to be ready to execute anywhere, anytime, any mission,” said Capt. James McCall, commander of Air Wing 8, in charge of all of the aircraft on board.