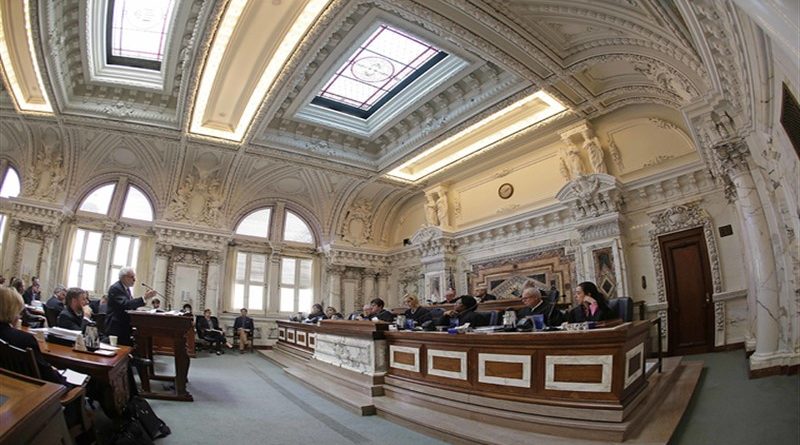 Bill to remove Nevada, 5 other states from ‘nutty 9th’ Circuit Court may be gaining favor

WASHINGTON — How big is the 9th U.S. Circuit Court of Appeals? The San-Francisco-based circuit is so big that it represents nine states, including Nevada, 20 percent of the U.S. population and 40 percent of the nation’s land mass. It’s so big that Congress has looked at bills to split the circuit since 1941, and it’s so big that none of those measures have succeeded.

This year, however, Sens. Jeff Flake and John McCain, both R-Ariz., see the possibility of success. They’ve introduced legislation to create a new 12th Circuit by peeling away six states — Nevada, Washington, Idaho, Montana, Arizona and Alaska. The slimmed-down 9th Circuit would continue to hear appeals from California, Oregon and Hawaii, as well as Guam and the Northern Mariana Islands.

The last time Washington created a new federal circuit — the 11th — was 1981. There were proposals to split the 5th and 9th Circuits, but the 9th remained the same while the 5th Circuit — Texas, Louisiana, Mississippi, Alabama, Georgia and Florida — was split. “It was easy to do. You had six states. You could divide them three-three,” Pittsburgh School of Law Professor Arthur Hellman observed.

Also, Hellman noted, “There was a consensus among the legal community that the split should happen.”

Not so the 9th. Some circuit judges have resisted attempts to reduce its size, which also would reduce their national impact.

There’s a price to be paid for that clout, said Walter Olson, Cato Institute senior fellow and founder of the “Overlawyered” blog. The 9th Circuit is the only circuit to hold “en banc” — or full bench — hearings with 11 of its 29 judges. Olson has taken to calling the 9th Circuit “the court that’s not all there.”

“It’s so big the three-judge panels cannot keep track of what they’re all doing. You’ve got a panel over here that says one thing and a panel over there that says the opposite thing,” Vanderbilt Law School professor Brian Fitzpatrick said.

Flake has argued that the district’s size contributes to a court case gridlock.

“The average wait time for a decision is 15 months,” the senator told radio talk show host Hugh Hewitt. “The one bedrock principle we have in this country is the swift access to justice. If you live in the 9th Circuit, particularly Arizona, you don’t have that.”

For years conservatives have mocked the 9th Circuit as the “Nutty 9th,” partly because of its unusually high rate of U.S. Supreme Court reversals, some of them unanimous. “If you can’t get anyone on the Supreme Court to agree with you,” Fitzpatrick opined, “it’s not a good sign.”

With Republicans controlling the White House, Senate and House, Flake has timing on his side, although he has said that he will try to win support from Nevada’s newest senator, Democrat Catherine Cortez Masto. According to staff, Cortez Masto is studying the issue.

Nevada’s GOP senator, Dean Heller, supports the concept. “The severe backlog of the 9th Circuit forces Nevadans to wait too long for their day in court,” Heller said, citing the 15-month delay. “It’s clear the need for a 12th Circuit is warranted. I support Nevadans’ right to a timely day in court.”

What’s in it for Nevadans?

University of Nevada, Las Vegas law professor Ruben Garcia doesn’t see a new circuit mitigating backlogs. “I think we’d have the same number of trial courts,” he said. The smaller 12th Circuit would have 10 judges — 19 would remain in the 9th — which means residents “would lose the expertise from judges” in 9th Circuit states.

Like Garcia, Hellman doesn’t see the new circuit ending caseload problems because the number of judges would not grow. As for the 10-judge panel proposed for the 12th Circuit, it would be smaller, but its rulings would be more predictable.

Flake has argued that a smaller circuit could do a better job representing Western states’ approach to land use, which departs from the approach of many California judges.

Last week, U.S. District Senior Judge James Robart got the attention of President Donald Trump when he issued a nationwide ruling that stayed Trump’s immigration executive order. A three-judge panel of the 9th Circuit heard arguments Tuesday as it considered whether to restore the order or maintain the hold.

Before the hearing, Trump issued a tweet that called Robart a “so-called judge” — a personal attack that Fitzpatrick believes makes it harder to pass the Flake bill.

“I don’t think Republicans like it when the president attacks judges,” he said. And, “it’s going to make the Democrats stiffen their spines.”

Amy Rose, legal director of ACLU Nevada, believes that if Robart’s decision intrudes on the debate over the 9th Circuit’s fate, “that’s exactly the reason not to pass the bill.”

Scholars have different views over which city should serve as a 12th Circuit headquarters. Some mention Seattle, others Phoenix.

Hellman recalls a late law professor who argued in favor of Las Vegas, with its central location and good airline service. More to the point, because the 9th Circuit has so many judges, which makes it harder to predict outcomes, the scholar joked, the circuit’s headquarters should be in Las Vegas because it’s such a gamble.