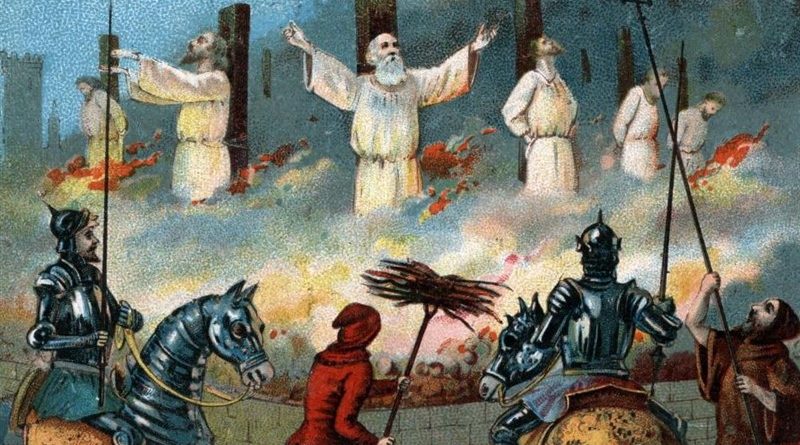 The unlucky Friday the 13th is one of the most well-recognized superstitions in the Western world. This tradition is over 700 years old and has a very interesting origin. During the 12th century, there was a massive religious war that consumed most of Europe and Asia. Europeans referred to these times as “the crusades.” This war lasted centuries and allowed an elite class of knights to accumulate so much power and wealth that their influence rivaled both the monarchy and the church. The Knights of the Temple of Solomon, or more commonly known as “The Knights Templar” were the most influential political force of their time. They were the world’s first international bankers and were the corporate giant of the Middle Ages.

The Templar Knights were a military force throughout the entire Crusades, but didn’t become a strong political organization until they were given diplomatic immunity by the church in 1126. Their close relationship with the church was unusual for the time, as the lifestyle of a knight was usually associated more with the monarchy. The Knights Templar represented both the warrior and the priest, and they were often referred to as the “fighting monks.” This best of both worlds diplomacy allowed the knights to form their own political dynasty which transcended the established powers of the time. They did not have to abide by the same rules as the church or the monarchy, but instead they had the advantage and privileges of both institutions.

During the Crusades it was rumored that the Templars studied alchemy and discovered forbidden knowledge on their journeys. This would not be the first time that this has happened in history; it is actually quite common for conquerors to return home with ancient artifacts, just like Napoleon did with the Rosetta stone, for example. Some say that instead of offering their discoveries to museums, the Templars kept the artifacts and knowledge within their own order. This is all speculation and legend, but what we do know for certain is that the Templars were conniving aristocrats who became the world’s most successful multinational bankers.

They had most of the known world caught in a complex pyramid scheme that is eerily similar to the scams that are being run by international bankers today. They collected taxes for protecting trade roads, bankrolled both sides of all the wars and exploited the massive peasant class, using them as workhorses to build their fortunes.

In order to get this blessing, Phillip covertly murdered 2 popes in less than a year until a candidate of his choice was in power. With all the necessary steps taken, King Phillip made his move. On the morning of Friday, April 13, 1307 there was a surprise raid on all the Templar offices. The knights were being arrested on over a hundred different counts of heresy and treason and many confessed after being brutally tortured. After a short, rigged trial the Templars were sentenced to burn at the stake. The grand master of the Knights Templar cursed the king and pope before he was executed, and synchronistically both died within the year. It is said that a fleet of Templar warships managed to escape France the night before the raids, which allowed those remaining members to maintain control of world events from behind the scenes. They apparently did this by changing their names and moving to various different parts of the known world. In fact, it is said by many that the Templars who managed to escape the Inquisition fled to Switzerland and reestablished their international banking cartel there.

This theory makes sense considering that the country has been a safe haven for bankers and robber barons for centuries. There are over 500 major banking institutions in Switzerland, the majority of them are owned and controlled by various elite bloodlines and covert organizations that I’ll describe in detail later on. It is estimated that around 35% of all the wealth in the world is held in Switzerland. The World Trade Organization or WTO is also based in Switzerland. These banks are among some of the only financial institutions in Europe that aren’t subject to audits and investigations from the new European Union government. The financial district in London called “the city,” as well as the Vatican in Italy, is also given the same kind of protection and secrecy, but they are the only areas in Europe that have those kinds of privileges.

It is also rather interesting that the Swiss Guard is responsible for guarding the pope (located in Italy, not Switzerland), a task that was once the job of the Knights Templar. The flag of Switzerland is actually an inversion of the Templar’s shield, the flag being red with a white cross and the shield being white with a red cross. It is important to mention that the banking elite may have ties to the areas government and economy, but they have nothing to do with the people of Switzerland. They do not represent them and their actions should not be held against the people of this country. In fact, Switzerland is one of the best places on earth to live, with very free social policies. They have a low crime rate because everyone in the country is armed and drugs are legal. They also remain neutral in all major wars, but still, when there is smoke there is usually fire. Although I wouldn’t mind living in Switzerland myself and imagine it is filled with wonderful people, there are just too many clues pointing to this region as playing a vital role in the many worldwide banking schemes. With this being a very realistic possibility, Templar influence would seem to put the puzzle together nicely, but it’s not something that we have been able to prove yet.
Switzerland is just one of the many places where the ruling class has established a stronghold to operate from, the same goes with “The City” in London, the Vatican, Washington DC and Zionist Israel. The people that live in these places have nothing to do with the elite’s plans, aside from being used as workhorses, cannon fodder and political pawns. Since the days of their fall from grace, the Templar Knights and their predecessors have learned their lesson, and have continued their work in secret. Even if the official order went underground, their business model and diplomatic strategies are still very much alive today and have a deep impact on our way of life. The Templars became an all-powerful “invisible government” by mastering and manipulating politics and finance, much like the bankers that influence world events today. In fact, today’s multinational bankers follow the Templars model precisely and use all of the same age-old tactics to exploit the masses.

John Vibes is an author and researcher who organizes a number of large events including the Free Your Mind Conference. He also has a publishing company where he offers a censorship free platform for both fiction and non-fiction writers. You can contact him and stay connected to his work at his Facebook page.John is currently battling cancer naturally, without any chemo or radiation, and will be working to help others through his experience, if you wish to contribute to his treatments please donate.