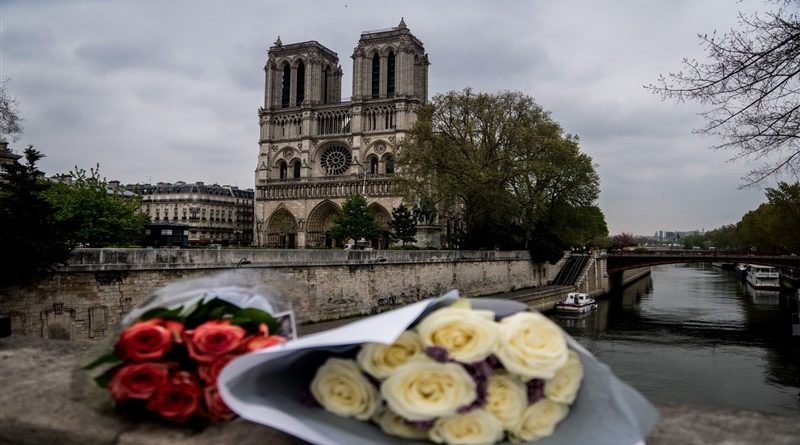 Who Do We Blame When Cathedrals Burn?

On Notre Dame, God, and scapegoats

Ihave a specific, but vivid, childhood memory of Mass. The church I attended growing up was built in the 1960s, a minor dark age of religious institutional design. The building was octagonal. The colors were earthy. A stylized crucifix hung from the ceiling. The altar sat in the middle, surrounded by pews, like a theater in the round. It was vaguely futuristic, the Holy Starship Catholic Church.

The priest, deacon, and altar boys would emerge from a door behind a fan of organ pipes and begin their procession, holding up the gospel and processional cross. Anyway, I remember thinking “God lives in the back.” Look, I was very young and Mass is intense, with all the incense and chanting and golden goblets. But it was a nice feeling — and for a short time, I may have believed it. There, in the other room, was God, the Almighty Creator.

I think of this when churches burn down. Does he watch those infernos from the outside or the inside?

Three predominantly African-American Baptist churches burned down in Louisiana recently. The police caught the perpetrator, the 21-year-old son of a local deputy sheriff.

It’s a sad story that didn’t get enough coverage. The South has an ugly history of white people putting black people in their place by lighting up their houses of worship. I’d suggest the old ways are coming back, but the truth is they never went away.

These churches were humble places for a community to gather and worship. I can’t speculate as to the motivations of the arsonist. I know some people suffer and lash out in awful ways. But it would not surprise me to learn this man was simply hateful. Ignorant. Evil. The thing about evil people, generally speaking, is they are usually to blame for acts of evil. Usually, they take credit! Not always, though. When they don’t, we have to hunt them down. This is life at its most uncomplicated. I was happy to hear justice made an appearance in St. Landry Parish.

These churches were no Notre Dame, the breathtaking 800-year-old cathedral built by kings, for kings. The ancient heart of an ancient city. But Notre Dame is, still, just a church, and it burns like any other.

Medieval Gothic cathedrals like Notre Dame were the moonshots of their era, technological marvels that left peasants and nobility alike speechless. The celestial vaunted ceilings, the kaleidoscopic colors of the stained glass, the otherworldly hush. Monuments to the political and religious power of the day.

The story of civilization is who did what to whom. A blame game that is thousands of years old.

Modern humans have hurled themselves towards the stars but, centuries ago, cathedrals pulled the wonder of the heavens down toward the people. A house of God. He lives there.

He doesn’t, of course. If he even exists, I don’t know. I have never spoken to a burning bush. My mom wanted to be a nun but fell in love with a Baptist boy instead. They taught me that God loves Catholics and Baptists equally. He loves believers and non-believers. Heroes and terrorists. People of all faiths and political ideologies, people of all colors and genders. We are all sinners, vulnerable and imperfect. There is enough perfection in the universe. He loves us because the broken parts are how he tells us apart.

I was raised to believe He hears you no matter where you pray (or meditate, if you’re the non-religious spiritual type or the CEO of a tech startup). He’ll hear you in a church basement, a basilica, a mosque or a synagogue. He’ll hear you praying in a park, or on a bus, or in the smoldering ruins of his home.

Iwatched videos of Notre Dame aflame on a screen the size of a candy bar. I could not make sense of it and neither could anyone else, no matter how hard they tried. The story of civilization is who did what to whom. A blame game that is thousands of years old.

The people paid to talk for hours and hours on television did their jobs, narrating what was plain to see. Notre Dame exists both in Paris and in countless imaginations. A mountain, now brought to its knees. The commentary was what you’d expect, words falling like embers.

There were serious thoughts and plaintive wishes, too. In some corners of the conversation, Catholics took solace that no earthly flames can reach the Kingdom of Heaven.

I also read reactions from those blessed with perspective and education. One explained how Notre Dame has risen from destruction before, and another with experience fighting fires described how best to extinguish the blaze. I watched a crowd of Parisians kneel and sing “Ave Maria,” a hymn that asks the Mother of God to pray for sinners. That’s you, that’s me, that’s all of us.

Then there were the paranoid political accusations. To some, a disaster is a race to tell the story that benefits them most. History isn’t always told by the victors; sometimes it’s told by the first, the loudest, the most willing to lie. But to others, there is a grim kind of comfort in assigning blame, as quickly as possible. It has to be someone’s fault, right? The tragic fires of 9/11 or Hiroshima or Atlanta were the result of villains, depending on who was burning and who started the fire. Those responsible can be hated. Hunted. Arrested.

But there is no controlling a faulty wire or a cow kicking an oil lamp. Fate cannot be brought to heel. You can’t drop a bomb on bad luck. Some fires burn for no reason whatsoever while God is in the back room doing God knows what.